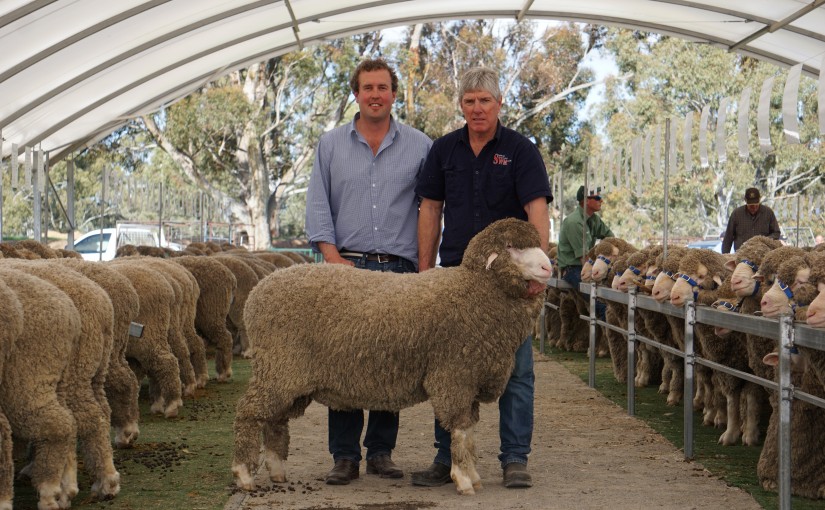 Superior Wool Merinos got stuck in early at the annual Wallaloo Park ram sale, paying the top price of $18,000 for lot one in the catalogue.

The ram was first of 196 at Wallaloo Park Merino stud, Wallaloo, that averaged $2796 a head on a clearance rate of 96 per cent.

Superior’s principal Richard Harkness liked what he saw from the start and won the poll ram for his Tintinara, SA, based stud.

Mr Harkness said he usually purchased a sire each year and this year’s purchase had the wool quality and structure he was seeking.

The dual poll ram was by Wallaloo Park 150422 and had a number of full brothers through the sale.

Wallaloo Park co-principal Trent Carter said the ram’s sire had bred well in the flock and carried that through with success at the Australian Sheep & Wool Show.

“The sale ram generated a lot of interest with his rich, deep staple,” Mr Carter said.

“The ram was an embryo transfer out of one of our leading ET ewes.

“It’s a cross that really worked.”

The 17.6 micron ram had figures of 17.6 co-efficient of variation, 3.1 standard deviation, 99.9pc comfort factor and a yearling clean fleece weight of 26, putting it in the top 10pc of the breed.

The ram was bought by Kluska Ag, Bordertown, SA.

Trent Carter said the 20.6 micron ram, weighing 130 kilograms, had “tremendous visual attributes” that were backed up by its breeding values.

It also showed figures of 24.9 for YCFW.

Stud principal Pat Millear said he liked the ram’s pedigree and its “doing ability all in a good square sheep”.

Trent Carter said the ram had been in the stud’s reserve team and would have been been retained for use in the stud.

NSW-based Verona Partnership, Condobolin, bought eight rams to a top of $3500; Shingle Hut, Wycheproof, bought seven at up to $3000, and Korrangie Farms, Kerang, bought five rams for up to $4000.