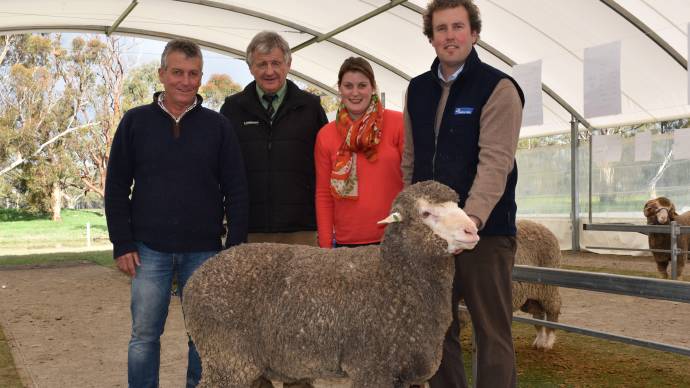 Despite heavy rain and flooding in some parts of North West Victoria, buyers from across the nation came to snap up 119 of 120 Merino and Poll Merino rams on sale at Wallaloo Park on Thursday.
The average price was $3325, up a massive $1016 from last year’s average of $2309.

Mr Walker said he wasn’t leaving the auction without the ram, so was willing to do whatever it took to snap it up.

“I’ve had to call on a few others to be shareholders to help me get over the line.”

An hour before the auction, Mr Walker contacted some of his other clients at Pimbena Poll, Ceduna, O’Brien Poll, Kyancutta, Karawatha Park, Buckleboo, and Lucernbrae, Callington, all of which are from SA, to get them on board as semen shareholders.

Mr Walker said he held the ram in high regard after seeing it at an inspection last week.
“The number one thing is its structure, it’s has typical Wallaloo Park skin and fibre, and has very good stats,” he said.

Mr Beasley runs a flock of about 10,000 Merino ewes, and requires a top sire every few years.

Mr Walker said Mr Beasley would use the ram as a semen sire on 200 stud ewes this year via artificial insemination (AI), and then as a live sire on 120 stud ewes during a “hectic paddock joining”.

“They’ll be using the ram to enhance the great fibre they already have in their sheep, and to add to the structure of their animals.”

He said it was another “bloody good one”.

“They’ll be using it to maintain their fibre and increase their density by fleece weight, in order to breed more top animals for sale,” he said.

A repeat buyer of 16 years, Mr Barr said he normally only purchases about 10 rams.

“I’ve normally run out of money at this point, but had a bit extra in the pocket this year,” Mr Barr said.

He said he bidded on a few of the top-priced rams, but was unsuccessful.

He said the Wallaloo Park rams he’s purchased over the years have helped improve his average micron.

“They’ve pulled my micron from a 24.5, to an average of slightly under 19, over the last three to four years,” he said.

“They’ve got lightened, white wool, with good length and staple, we’re definitely here for the wool.”

John Carter, Wallaloo Park, said he was very pleased with the result of the sale.

“We got widespread support from five states across Australia, there was plenty of buying power from over 50 regular buyers and a few new buyers too,” Mr Carter said.

Mr Carter said he thinks they’ve managed to achieve a “balanced Merino”, which is what everyone is after.

“They’re going to plenty of different environments, so they have to have the right skin and wool,” he said.

“The wool is white and soft, and the sheep have strong constitutions, I think that’s why we’re getting broad interest.”

Andrew Sloan, Landmark, has attended all 25 of the Carter family’s auctions.

Mr Sloan said this year’s sale was once of its best.

“It had a good clearance, with all but one selling, there were old buyers and new buyers, and the top price was a big number,” Mr Sloan said.

“It was a very strong sale.”

He said that with all the rain being received at the moment, it’s no surprise buyers were so willing to spend big.

“It’s a better season this year than last, there’s so much rain and this will mean there’ll be more feed.”

He said buyers were returning for the great wool and carcase qualities.

“They like the wool type, it’s beautiful wool,” he said.

“They’re good, heavy cutting rams, that will go on and get the job done.”